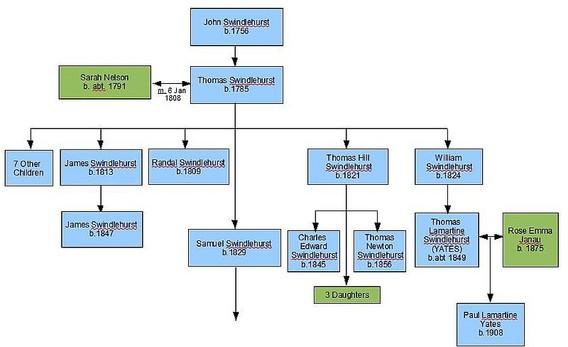 Thomas' son, Thomas Hill Swindlehurst, followed in his father's profession and is listed in a Trade Directory of Preston in 1853 as:

By 1857, the factory was called "Phoenix Roller works". The site of Works, on the corner of Byron Street and Moor Lane is now the location of Ribble Brook House Flats. The Queen Vic Pub on the opposite corner of what remains of Byron Street appears to be the original building.

This picture taken in about 1900 shows the location of the Phoenix Roller works on Byron Street.

By the end of 1865 the Phoenix Roller works had relocated a short distance away the eastern end of Victoria Place / Victoria Street, Moor Lane, where it remained until at least 1885 as shown in a trade directory listing of that date. 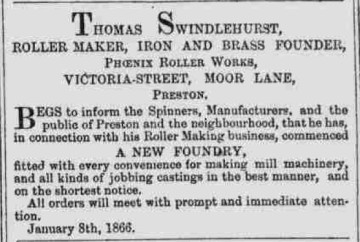 Thomas made the announcement of the new foundry on 8th January 1866.

Strangely, the announcement was not published in the newspaper until June. Perhaps it was the event that happened that month that prompted Thomas to publish it.﻿

Just 6 months after opening the new foundry an explosion at the works nearly killed Thomas and one of his workers as reported in the Manchester Courier on 13th June 1866  (and adjacent to a published letter from Florence Nightingale!):

“On Monday evening, after the furnace man at Mr Swindlehurst’s factory, Victoria Street, Preston, had just thrown into the furnace a piece of metal weighing between 20lb and 30lb, a terrific explosion occurred.”

The Westmorland Gazette of 23rd June went on to say:

“Iron, red hot and in other states, was thrown into the air and driven across the foundry yard in all directions. Swindlehurst was standing with another gentleman about three yards from the fire door of the furnace but as this explosion took place in the upper part of the furnace, the heated iron was driven clean over them, and they were in no way injured…..The only construction which can be placed on the affair is that the ball which was thrown into the furnace was a bombshell charged with the usual explosive materials. The streets were crowded soon after the explosion, and workmen in some of the adjoining manufactories, rushed out of their rooms in a state of great terror, being apprehensive that several persons had been killed by it. Luckily, however, nobody was injured and the only damage done was to the furnace, which was partly broken down on one side.”

On 19th December 1873, and reported in the Manchester Evening News the following day, Thomas received damages of £960. 10 shillings at Liverpool assizes. This was in compensation for injuries sustained by his wife while travelling on the Lancashire and Yorkshire Railway, near Preston, in December the previous year. This was a substantial amount of money for compensation and would suggest that the injuries Margaret sustained were equally substantial and life changing. No detail has been found yet of what the incident was, but there does not appear to be a rail crash around this time.

On 31st March 1881 Thomas sold by auction a large quantity of plant and machinery from his works and in the Preston Chronicle between April and July 1881 announcements are made that he is no longer going to continue with the iron-founding part of his business but will continue to concentrate on the roller making. It would appear however, that Thomas died on 9th June 1881 in Broughton, near Preston, aged 60, whilst the adverts were still running. This would suggest that he took ill and decided to reduce the demands of the business, but died suddenly and unexpectedly. His fast demise is further indicated by the writing, or revision, of his Will on 30th May 1881, just ten days before his death. (See "The Will of Thomas Hill Swindlehurst")

Thomas Hill’s son, Charles Edwards Swindlehurst, appears to have initially worked for his father and then taken over the works from him following his death. In a trade directory of 1881 he is listed as Roller maker's Manager, but by 1882 he is listed simply as:

Less than 16 months after his father’s death, Charles died on 25th September 1882. The fate of the Phoenix Roller works is unknown.