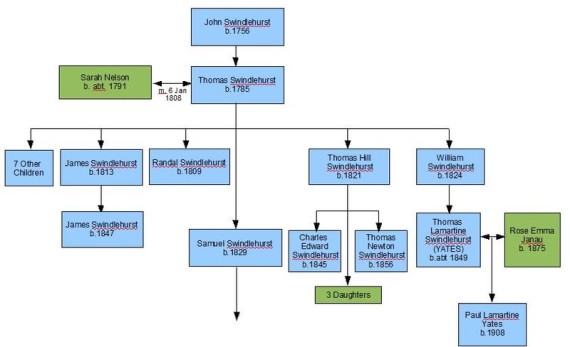 Samuel Swindlehurst was Thomas and Sarah’s tenth child and was christened on 28th October 1829 at St Johns Church in Preston. He was living with his parents and siblings in the 1841 and 1851 censuses at 12 Great Shaw Street, Preston. In 1851 his occupation is shown as an Engineer. He got married soon after the census, to Mary Eaves, daughter of Joseph Eaves – a shoemaker, in Preston in 1851.

Following his marriage, he and his family appear to have moved around the Lancashire Cotton manufacturing area. In 1852 their first child, Sarah Jane was born in Blackburn, as was their second child Margaret Hannah in 1855. Next was Joseph Eaves, born in 1860 in Wigan, which is where they still lived at the time of the 1861 census, however by the time Elizabeth Ellen was born, they had moved back to Preston.

The 1861 census is very interesting, as there is a link to a later change in Samuel’s career path. His occupation is shown on the census as an Engine Millwright Cotton Maker.

Living with the family at that time at 17 Great George Street, Wigan were two lodgers, Alice Fairbrother, a cotton winder in a factory, and William Williams, a retired Hatter from Limerick. In fact Samuel actually established a hat retail business in 1865 at 154 Friargate in Preston. Did he learn his new trade from William Williams?

Listing and Advertisement in a Preston Trade Directory for 1865, the year that Samuel established his hat selling business. The listing confirms that he is a hat seller rather than a hat maker. 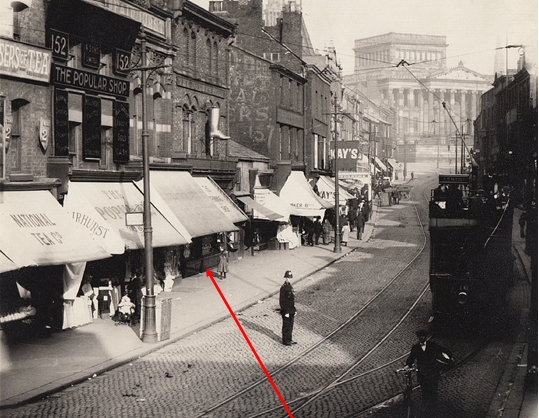 This picture from about 1910 shows the shop at 154 Friargate, formerly occupied by Samuel Swindlehurst. Here it was Abbatts “Golden Boot” shop. The area in the immediate foreground has been totally erased from the landscape by the Ringway inner ring road.

At some time between 1867 and 1871 Samuel and his family moved to Barrow in Furness. In the 1871 census, Samuel’s profession is confirmed as that of a Hatter at 61 Duke Street, Barrow in Furness. Samuel continued his father’s work with regard to the Temperance Movement and in the book, “History of Temperance Reformation” by Winskill, it says – “[Thomas] had a son Randal and one called Samuel who was an earnest reformer and advocate at Barrow in Furness”

Samuel is shown as living at the Duke Street address in the 1871, 1881 and 1891 censuses, and trade directories show that his hat business continued to trade successfully from the shop on the ground floor.

1871 Census Extract from Barrow in Furness 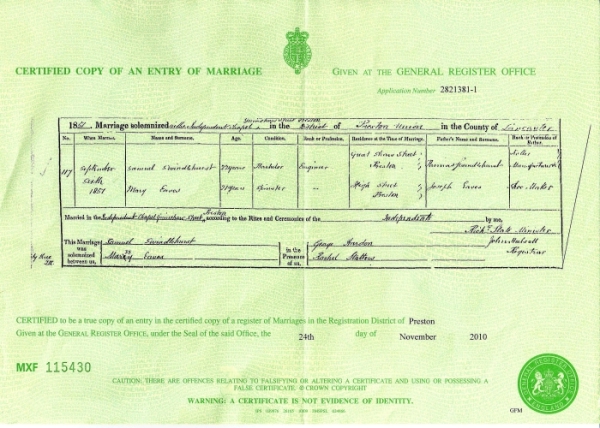 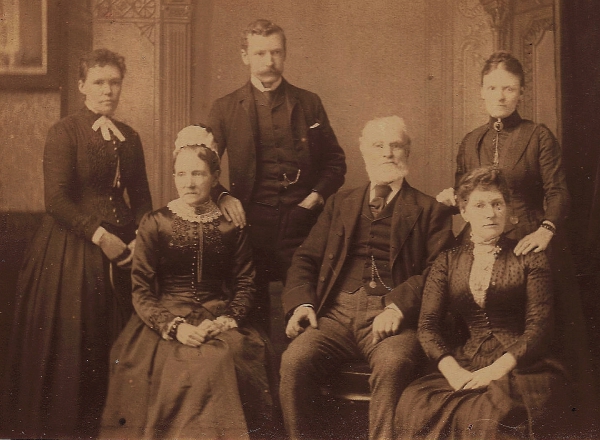 Samuel appears to have travelled frequently to Sunderland to attend meetings of the Temperance Society and the “Good Templars” (IOGT). His eldest daughter, Sarah moved to that area when she married in 1873, and he may have visited her at the same time. It was on one such trip, on 16th August 1875 that Samuel was involved in a road accident that left him with a broken leg. The article below from The Sunderland Daily Echo and Shipping Gazette of 17th August describes how the accident happened: 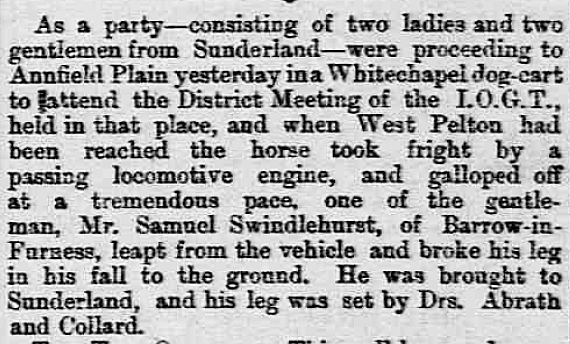 1881 Census Extract from Barrow in Furness

In the 1891 census, all Samuel and Mary’s children had left the address, but he and his wife were able to afford a live-in domestic servant. Mary died within a month or two of the census.

1891 Census Extract from Barrow in Furness 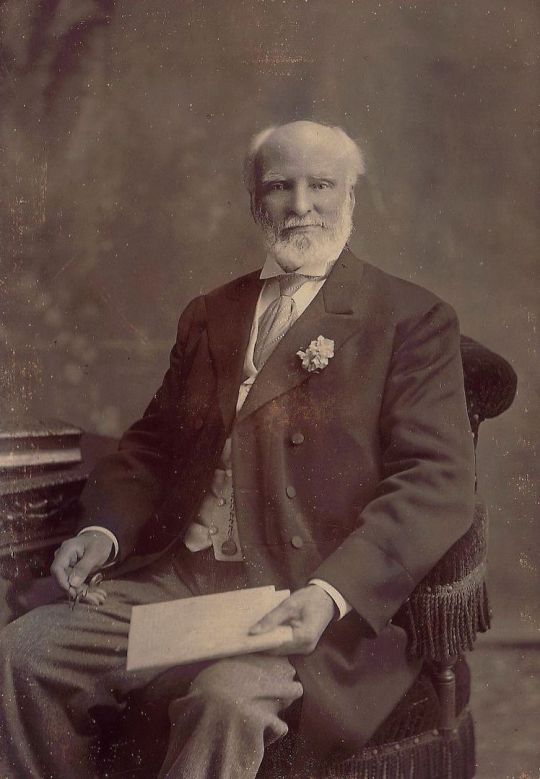 Samuel Swindlehurst in about the 1870s

Samuel certainly seemed to understand the power and benefits of advertising. Here are a few of his adverts from various Barrow in Furness newspapers and publications: 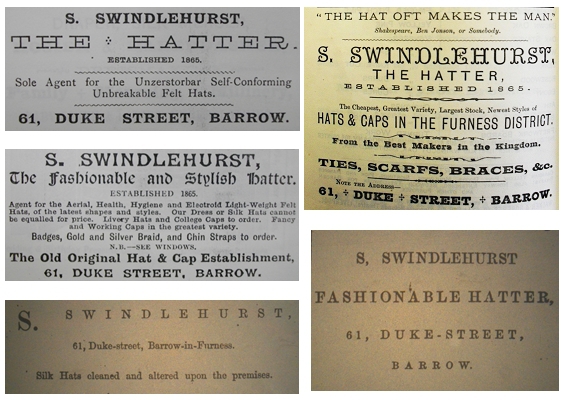 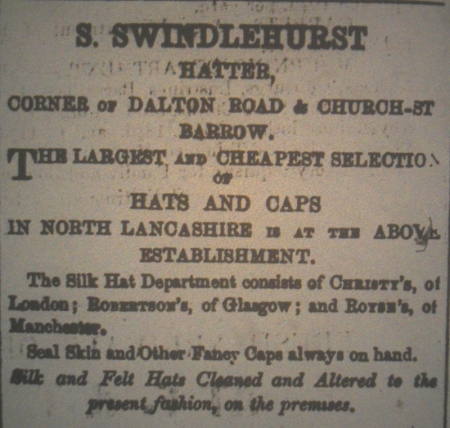 His financial success did not continue however and something went very wrong. It is thought that, like his father, Samuel spent too much of his own wealth in his promotion of Temperance. As reported in the Sunderland Daily Echo, (7th October 1901), he was highly esteemed for the fearless and uncompromising stand he took on the drink question, often to his disadvantage, both pecuniarily or otherwise. The Edinburgh Gazette of 26th April 1898 made the announcement in the Insolvency listings that Samuel was bankrupt.

Further to this, the London Gazette of 4th October 1898, gave details of Notice of Dividends to be paid to creditors. These were set at 2 shillings and 10 pence for every Pound owed, and would be paid on 10th October 1898. 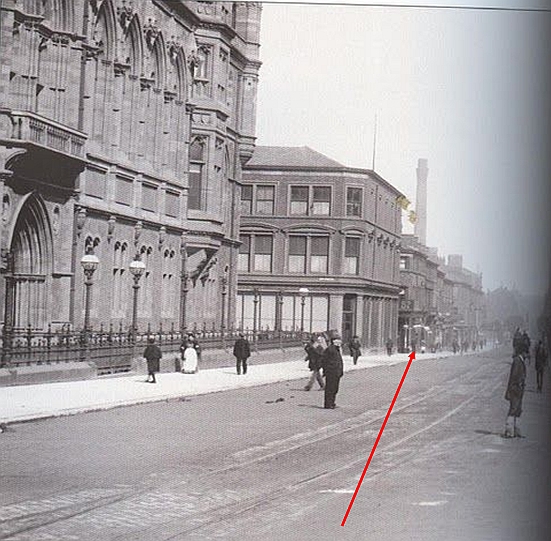 The red arrow indicates where Samuel Swindlehurst’s hat shop was located on this 1898 photograph of Duke Street, Barrow in Furness.

Following these events, it appears that Samuel went to live with George Richard Atkinson and his family, where he is shown on the 1901 census as a retired hatter. It is unclear why this would be, as they were not directly related. George’s only connection at that time was that his brother’s fiancée was Samuel’s granddaughter.

Samuel died suddenly soon after, on 6th October 1901. This is how the local newspaper reported his demise and his final words:

His lifetime association with the Temperance movement is recorded in his obituary, published in the Alliance News. 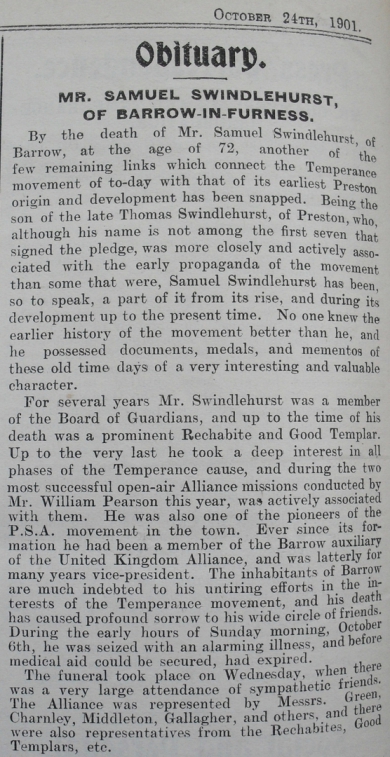 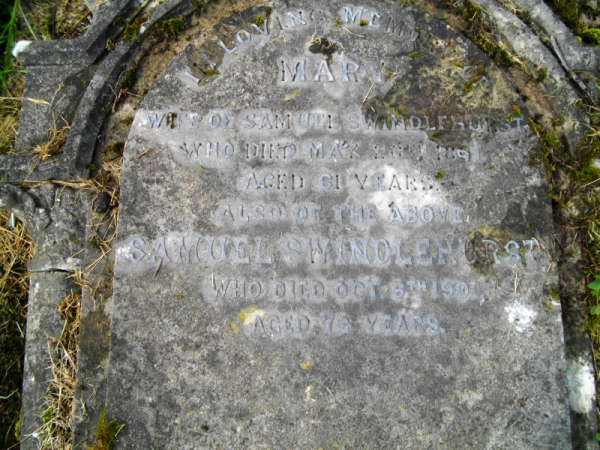 The gravestone of Samuel Swindlehurst and his wife Mary. Barrow in Furness Cemetery.