To most residents of Shotton, and there are at present 9000 inhabitants, the town has only about 100 years of history to its name, since the establishment of the John Summers Steel Works. There is in fact evidence that there has been a settlement here since Saxon times, proving that the town actually has about 1000 years of history.﻿﻿

One thousand Years ago, in A.D. 1000, a Saxon crofter by the name of Cylla (pronounced Killa) cleared an area of woodland and began to build a smallholding for himself and his wife. As the years passed by, in order to feed his growing family, this smallholding was extended until it had become a farmstead with a cluster of small huts with thatched roofs. The farm stood near the crossroads of four cart tracks. One led north to the salt-marsh, one south to the Ewloe hills, one east to Eston (Aston) Manor, and the fourth west to Wepre. To the local inhabitants and travelling traders the farm became known as "Cyllingas," the homestead of Cylla's family, but to Cylla it would always be "Schot-tun," his farmstead in the glade.

This account of course is a rather romanticised version of the founding of the town of Shotton. Just how and when the story of Shotton began will always remain a mystery. The account given above, however, may not be entirely fictitious. We will never know if Cylla was the first settler in ancient Shotton, but the name, which survives today in the form of Killin (Killin's Farm/Killin's Lane), has existed in the town for many centuries. The historian Richard Willet suggested that "Killin" derives from "Celyn", the Welsh word for holly, but for a number of reasons this is now considered to be incorrect.

Likewise, some have suggested that the name "Shotton" means "Town of the Scots". This might be true of the three other Shottons that exist in Britain due to their proximity to Scotland - Shotton and Shotton Colliery near Peterlee in Durham, and Shotton in Northumberland (which lies less than 1 mile from the Scotland border). It is most unlikely that the same explanation can be given for the origin of the name of our own Shotton. Another recent interpretation is that the name derives from the Old Norse words sjò (sea) and tùn (town/village), although in its earliest days, Shotton could hardly be called a town or village, but merely a collection of a few farms.

The true origin is likely to be similar to that of the nearby village of Shotwick. Both names appear to be Anglo-Saxon in origin. The first part of the names, "Shot" is a Saxon word for a clearing, or a glade, in a wood. The "ton" is again a Saxon word, (from "tun"), which means an enclosure or farmstead. Therefore the probable meaning of the name Shotton is "The farmstead in the glade." Shotwick is likely to mean "the settlement, or clearing, beside the creek". 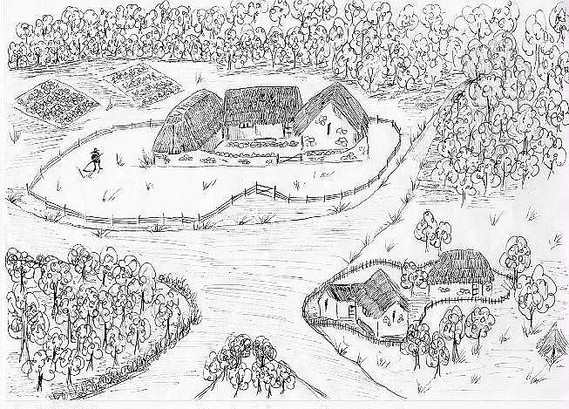 So how did a Welsh town get an Anglo-Saxon name? To answer this we must look briefly at some ancient history of Britain. The Saxons first landed on British shores around the year AD 449 and, apart from a brief time under Viking Danelaw, they dominated England until AD 1066. Penda, who ruled the Saxon kingdom of Mercia about AD 632 to 655, had a brother whose name was Eawa. The Wepre Brook formed the most westerly border of the area controlled by Eawa, and it is thought that his name survives in the place-name Ewloe. One hundred years later, Offa became Mercian king and the great Offa's Dyke is believed to have been built during his reign. This physically separated Celtic Wales from Saxon Mercia. Shotton was then on the Mercian side, and therefore English.

The original small hamlet of Shotton could date back as early as the eighth century and it grew up around the junction offour lanes which still exist today. They are now known as Killin's Lane, Wet Lane, Aston Hall Lane and Shotton Lane. Killin's farm, if not the first dwelling in the hamlet, was most certainly the first farm, and therefore put the "ton" in Shotton.

Shotton does not specifically get a mention in William the Conqueror's Census, the Domesday Book of A.D. 1086. It most likely was included in the entry for Aston Hall:﻿ 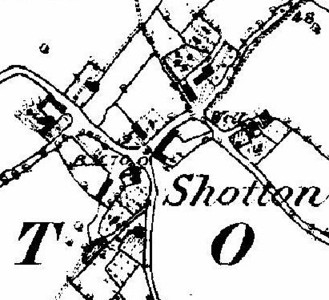 Hamo (of Mascy) holds Eston. Edwin and Thored held it as 2 manors; they were free. 1 hide paying tax. Land for one plough. It is there with two riders, 2 villagers, and 3 smallholders. Woodland 1 league long and as wide. Value 10 shillings. Ranulf holds 1 virgate of this land"﻿

A cross, possibly Saxon, was still standing in a field known as Shotton Field in 1685. This field probably belonged to the Killins, and the cross marked an early boundary with the Manor of Ewloe.