In 1784 a group of influential industrialists formed the "Flint Canal Company" with a view to building a canal from Greenfield to Flint, parallel to the river, for the conveyance of coal. At the time, the project was considered to be practical and profitable, but it never materialized.

In the 1780's Shotton had begun to see an increase in traffic and there was a need to build a proper road through the village. The traffic problems in those days were, of course, caused by horse drawn carts. Shotton's main road was an important Turnpike road, listed under the Act in 1757. In 1788 it was improved and it was necessary to replace the wooden bridge that crossed the Wepre Brook.

The Flint Canal Company saw the construction of the new bridge as another business venture, hoping to make a profit from the tolls. They built the bridge together with a round stone toll house on its south-east corner. The bridge was about 18 feet long with thick stone parapet walls. The "Round House" stood for almost a hundred years, being demolished in 1885. It is not known for certain if the house was ever used as a turnpike. The last occupier was a Mrs. Mary Gerrard and her two sons. The building was replaced with a rectangular brick building, but it was still known for many decades as the Round House. This building was recently painted blue, and houses a finance broker's. 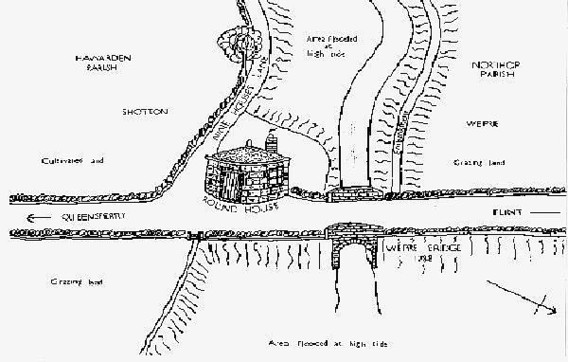 The Round House and Wepre Bridge in the early 1800's

Until 1929 it was not known who the industrialists of the Flint Canal Company were. In that year the old stone bridge was demolished as part of a road widening scheme and replaced with a stronger reinforced concrete structure. In a cavity in the old bridge was found a bronze plaque, measuring approximately 7 inches by 5 inches, together with coins from the 1780's. When the new bridge had been completed, the plaque was cemented into a panel of the south west wall. The plaque has long since disappeared, but its original location can still be seen as a small rectangle to the right of the 1929 foundation stone. The inscription on the plaque read:

This Bridge is erected

at the expense of the Flint Canal Company

and Edward Jones of Wepre, Flintshire.

And the first stone laid by the said Edward Jones 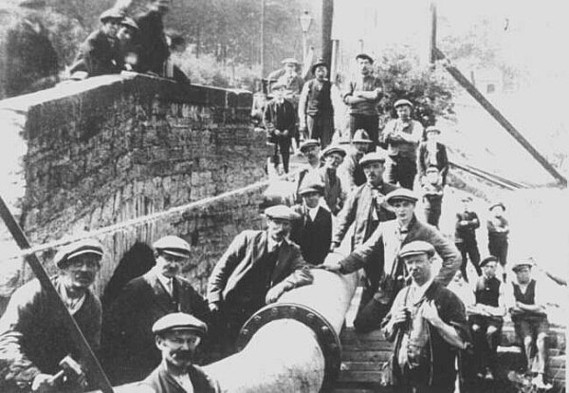 Edward Jones of Wepre Hall was undoubtedly the instigator of the project, as he lived locally. It is significant that the five promoters of the Company were wealthy men and took a leading part in the Industrial Revolution in North Wales in the late 18th century.

The 1929 foundation stone is inscribed with the words: