A large house, known as Shotton Cottage was built around 1820 near the border of Shotton and Queensferry. It was owned by Miss Frances Davison, daughter of Charles Davison a wealthy Buckley Brick maker. 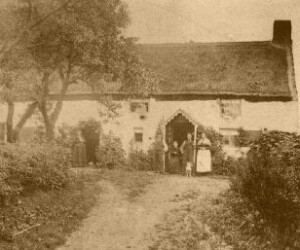 This picture from 1880 shows a cottage in Shotton (Possibly Shotton Cottage?)

The cottage was constructed in Georgian style and consisted of a large kitchen with stone slab floor and oak beamed ceiling. There was a spacious dining room and lounge with another small room for the servants. From the main hall a carved oak spiral staircase led to four bedrooms and a bathroom. The grounds extended to 21 acres and consisted of orchards, lawns and a meadow. Miss Davison died in 1901. A window in St. Ethelwolds Church was donated by the Hurlbutt family in her memory. The cottage became the property of the Hawarden Castle Estate, and the first tenant was James Hampson. In 1909 John Vivian Harris took over the tenancy at an annual rent of £40. In about 1920 the Salter family moved into Shotton Cottage, and most people today remember the place as "Salter's Farm." In the late 1950's the house and outbuildings were demolished and the land became the playing field of the High School. All that remains of this once impressive dwelling is a large tree and an area of rough ground beside the footpath to Westminster Crescent.﻿ 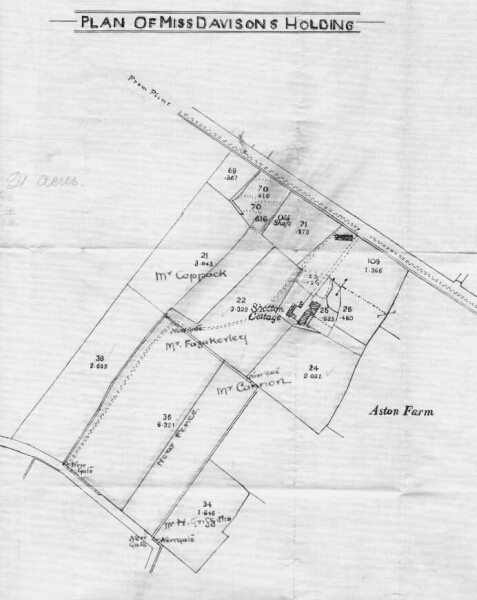 Plan of the Shotton Cottage Farm from c. 1900 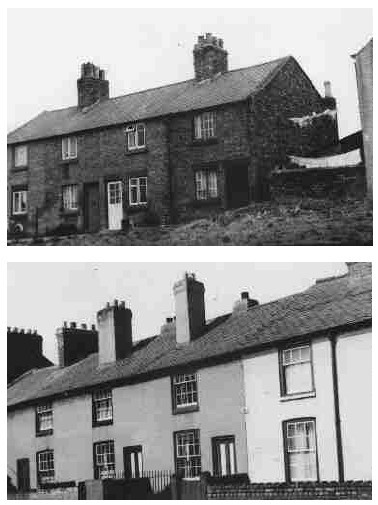 Between the years 1840 - 1850 a chemical works existed in Connah's Quay and a number of Irishmen were employed there. They lived in a group of about 40 small brick cottages that were built near the "Nine Houses" hamlet. One of the alleyways between the houses was known as the "Irish Entry." Only a few of these cottages remain, the majority was demolished in 1959 and five Pensioner's bungalows now occupy the site in Woodland Street. 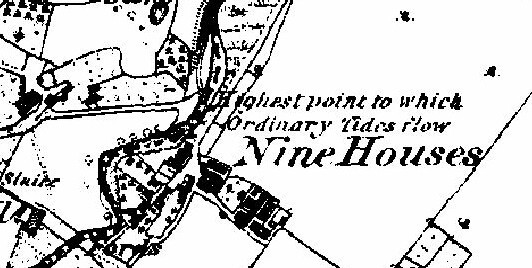 An old soldier lived in one of the cottages in this hamlet. His name was Sergeant Rugman who fought in the Battle of Inkerman during the Crimean War in 1854. He was wounded in his thigh.

In 1844 James Heyes and John Fox founded the Castle Hill Brewery at Ewloe, and began building public houses in the area.

In about 1847 the brewery built the Plough Inn at Aston and in 1848 the Castle Inn was built near to two newly constructed grocery shops in the Ninehouses hamlet of Shotton.

In 1898 a surveyor's report showed that the two pubs were each worth £1500. For many years, the landlord of the Castle Inn was Samuel Aston, formerly the head stevedore at the port of Queensferry. At the same time, Joseph Dunn Coppack owned one of the grocery shops: and the other owned by W. Fenwick. Between 1929 and 1950 Bill Henderson and his wife were tenants of the Inn and it came to be known as "Hendy's." The name is still used by many locals to this day. 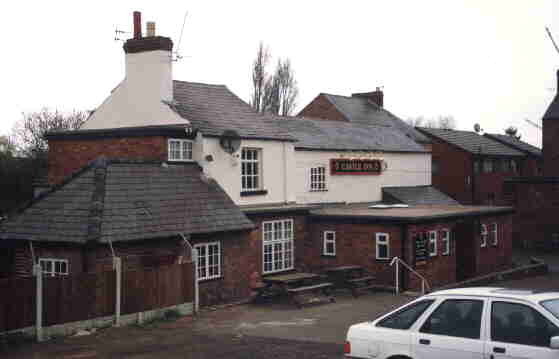 In the year 1845 a stone quarry was opened at the north end of Ryeland Street, where Manley Court now stands. The material extracted from there provided stone for the track and culverts of the Chester to Holyhead Railway, which was under construction through the town at that time. In later years the abandoned workings would fill with water, and a local legend said that it was a bottomless pit. The quarry is remembered in the name of a row of terraced houses in Ryeland Street, near the site - "The Quarries." Also, the old bakery, which later became Clwyd Photoservices, was called the Quarry Bakery.

Two other men of note were born at this end of town. One was Harry Weale who won a Victoria Cross in the First World War, and became a local hero. The other was Fred Robson a professional and international golfer who played for Great Britain in the Ryder Cup, at the turn of the century. There were, in fact, five Robson brothers who would practice their golf on an area of sea turf now occupied by Connah's Quay power station. Joe Robson also achieved professional golfer status.

Shipbuilding in Deeside in the mid 19th century was centred in Connah's Quay, Queensferry and Sandycroft. However, this does not mean that Shotton missed out entirely. These shipyards inevitably provided employment for a number of Shotton's residents. Today there are still visible reminders of Shotton's association with the river . A steam boat called the "Taliesin " plied the Dee in the 1840's. The boat itself was named after the Welsh poet of the sixth century, but its name is preserved in "Taliesin Street." In the 1890's and later there was another Taliesin on the Dee. This was a tug owned by Coppack Brothers of Connah's Quay. Ryeland Street derived its name from the ship "Ryeland" because its skipper, Captain W. Morrow, built the first house in the street. 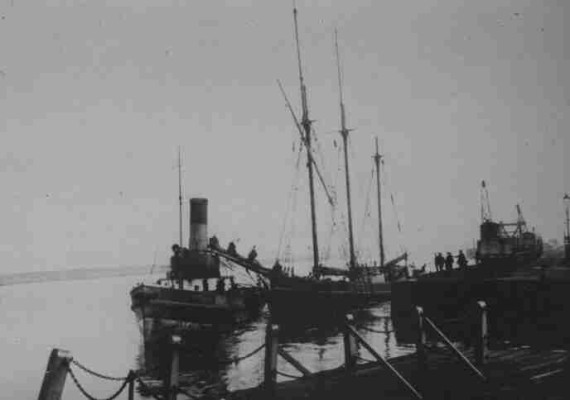 The Ship "Ryeland" at dock in Connah's Quay

From 1870 to 1878 there was another colliery in Shotton. It was known as the Eleanor Colliery and it had two pit shafts. One was situated approximately where the Esso petrol station now stands. The second shaft was on the opposite side of the road and is currently wasteland between B&Q and Planetree Garage (now closed).

The pits extracted coal from seams up to 500 feet beneath the river. A narrow gauge iron tramway was constructed to shuttle coal from the mine, and this ran down Hurlbutt's Drive, under the rai1way, and on to the river for loading onto boats.

Mr. Lowry was the Engineer Manager of the colliery, and he originally lived in Prestatyn. In 1877, the under manager of Eleanor Colliery, Isaac Davies, had a row of cottages and a shop built along the main Shotton road. The cottages were named "Eleanor Terrace" after the colliery. They can still be seen today, where a Fancy Dress and Joke shop occupy part of the terrace.
When the Colliery closed, Mr. Lowry moved to Chile to manage mines there. He returned to Shotton later and became Landlord of the Station Hotel, (now "The Clwyd").