The First Crusade to the Manufacturing Towns of Lancashire 1833

The following is an account of the first teetotal tour as covered in the book “Facts about the Origins of the Teetotal Principle and Pledge” (1894) by W. Pilkington. 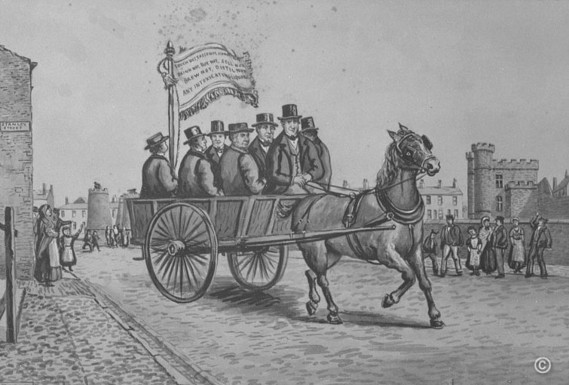 “After the Advocates had succeeded in establishing Teetotalism in most of the villages around Preston, they undertook a week's missionary tour of the principal manufacturing towns of Lancashire. The names of the first band of voluntary teetotal crusaders were, Henry Anderton, Thomas Swindlehurst and his son Randal, James Teare, Joseph Livesey. Jonathan Howard, and George Stead. These seven men started from Preston on Monday, the 8th July, 1833, it being the race week. As there were no railways then, they took a horse and car, and about 10,000 teetotal tracts, and carried a white silk flag, on which the following words were inscribed, "touch not, taste not, handle not, drink not, buy not, sell not, brew not, distil not any intoxicating liquors." Such a programme inscribed on silk sixty years ago caused great excitement, and became the subject of gossip in the villages and towns through which they passed, and large crowds of people turned out to see and hear the Preston teetotal fanatics, for as such they were regarded. They formed themselves into two companies in order to hold two meetings at the same time, and owing to them dividing themselves, some of them had to walk. The first place was

Here they commenced their campaign on the evening of the day they left Preston. James Teare, Henry Anderton and Randal Swindlehurst addressed an overflowing meeting in the Music Hall. They were the means of establishing the teetotal cause in this town. On the same day Mr. Joseph Livesey, Thomas Swindlehurst, Jonathan Howard and George Stead pushed on to

and in the evening held an excellent meeting in the Primitive Methodist Chapel, which was filled with an appreciative audience, and a considerable number of people signed the pledge. The following Tuesday morning, July 9th, the little company of pioneers met together and went on to 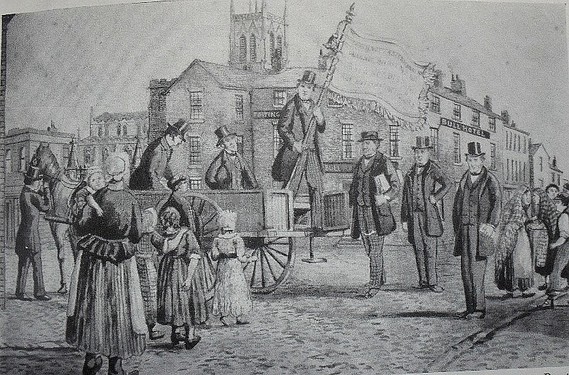 The landing of the Crusaders in Blackburn, Thomas looks on (far right)

Four of the speakers halted here. A cart was procured, and sent through the town in which were seated the bellman, who announced the meeting, a person carrying a large placard stating the time and place of meeting; and other persons distributing tracts. The result was a crowded Primitive Methodist Chapel, and 37 converts, including the Rev. T Howorth, the Unitarian minister. Three of the party arrived in

on the same Tuesday evening, and the bellman was sent round, which secured a moderate attendance. The following morning the bellman was sent round the town again, and informed the people that a meeting would be held adjoining the main street, and one of the mills stopped working in order to give the workpeople an opportunity to hear the gospel according to Preston teetotalism. Two or three of the speakers hurried on to

but no place could be obtained to hold a meeting. On Wednesday morning the whole of the company united, and decided not to pass Rochdalewithout holding a meeting, and events proved too strong for the opponents. The Preston men drove through the main streets in their car flying their silk flag on which was gilt letters, "Temperance meeting."

The bellman was not at home so they left his fee and took his bell and rang it themselves in the car; James Teare, who had a powerful voice, announced the meeting to be held on the ground called "The Butts," at 12 o'clock. At that time a large number of people had assembled; several powerful addresses were delivered. The speakers were sneared at by a lawyer, and interrupted by a drunken maltster who created considerable excitement, but they were unable by all their clamour to suppress the meeting. The result of this day's work was the Rochdale teetotalism. On the afternoon of the same day a number them arrived in

and the report of their arrival soon spread through the town. A very large schoolroom belonging to the Methodists had been procured, and the meeting was advertised on the walls by some friends of the cause.That frightful thing called "a collection at the close of the meeting," unluckily was named on the bills. To counteract the probable influence of this notice, and to make the meeting better know, the bellman was sent round and announced distinctly that there would be no collection. The meeting was large and enthusiastic. On the same evening (Wednesday) they held a glorious meeting in﻿

In this town every arrangement had been made, bills had been circulated, and the bellman was sent through the town. The superintendent Methodist minister presided. At the conclusion 33 persons signed the pledge. Early on Thursday morning a message came from a Mr. Hindle, the unsuccessful candidate for that town at the last election, requesting the deputation from Preston to come and breakfast with him, with which they complied. On Thursday about three o'clock they entered

By some misunderstanding no place for a meeting had been procured. At six o'clock permission was given to hold the meeting in the Primitive Methodist Chapel. The car was ordered out, a drum was obtained, also a man to beat it, and they drove through the streets, stopping at every crossing, one beating the drim, another calling out the meeting, and others were showering out tracts. This mode of procedure caused great excitement, and the purpose was fully answered, and at the close they were requested to remain another night.

On Thursday, the 12th, they went on to

and here they conducted a meeting in the theatre of the Mechanics' Institute, which was crowded. Six of the Preston men addressed the assemble, which was held spellbound for three hours. The audience constantly applauded the speakers as they propounded the principles of teetotalism. "This," says Mr. Teare, "was the first teetotal meeting held in Manchester; but the seed sown on this occasion soon sprung up and brought forth abundance of fruit." A man named Kennedy came from Manchester to Preston once every year while he was able, to publicly express his gratitude for the visit of the Preston men to that city in July, 1833, which had been the means of saving him from the drunkard's grave. It has been said that Mr. Kennedy was the first in Manchester, who was converted by the advocacy of teetotal principles.

On Saturday, the 13th, they left Manchester for

and the meeting was held in the Independent Methodist Chapel in the evening. Stirring addresses were given by six of the Preston advocates. Many in the assembly were moved to tears. Mr Livesey did not speak on this occasion but was requested to deliver a lecture on the subject the following day. The chapel was granted and the lecture was announced for Sunday afternoon at a quarter before five. On this occasion the chapel was filled; up to this time, like all the rest, the Bolton society was on the basis of abstinence from spirits only, the vicar being the president; but in the following week "The Bolton New Temperance (Teetotal) Society," was inaugurated. Mr Livesey and two others from Preston assisted on the occasion. On Sunday morning, the 14th, they returned home and held a meeting in

on their way. From thence they proceeded to Preston where they arrived strong, healthy, and hearty. It was a hard week's work, after which they resumed their ordinary duties highly gratified with the glorious results. On the following Tuesday evening, July 16th, a densely packed meeting was held in the Cockpit anxious to hear of the success or otherwise of the mission. The men spoke one after another, for nearly two hours, relating to the audience what they had seen and heard, together with the reception they had met with in different places. This was a most enthusiastic meeting. The returned missionaries were frequently cheered as they related their experience and success which had crowned their efforts. In addition to the towns mentioned, they addressed many meetings on the road.”