The Temperance Movement was a social movement against the use of alcoholic beverages. At first temperance usually involved a promise not to drink spirits and members continued to consume wine and beer. On 22nd March 1832 Joseph Livesey founded the Preston Temperance Society whose pledge required members not to drink spirits. But Livesey pressed the issue of total abstinence and, in August 1832, he and six others first signed this pledge: "We agree to abstain from all liquors of an intoxicating quality, whether Ale, Porter, Wine, or Ardent Spirits, except as Medicines." Livesey and his colleagues became known as the 'Seven Men of Preston'.

The seven names have an honoured place in Temperance history, but the association of the names was casual, and not one of the seven men, except Mr. Livesey, exerted any powerful influence on behalf of the new movement.

According to Richard Campbell in his “History of the Rechabite Order”,

“The most notable ‘Men of Preston,’ in the sense of self-denying and resolute propagandist labour, were in reality six:

This total abstinance became known as Teetotalism, a word that is belived to have originated when Dicky Turner, a member of the society, (who had been persuaded to sign the pledge by Thomas), in a speech said that nothing would do but "tee-tee-total abstinence”. Some have said that this was because Dicky had a stammer, but Livesey refuted this. He said that if Dicky did not have a word for something, he would invent one and that is what he did in this case to emphasise the point, much as we might say “Total abstinence with a capital - T” 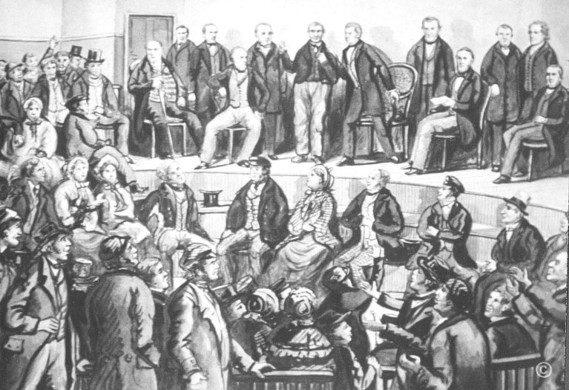 Dicky Turner (standing, centre, in a short jacket) coins the word “Teetotal” at a Temperance meeting at The Old Cockpit, as Thomas Swindlehurst looks on (2nd right of Turner).